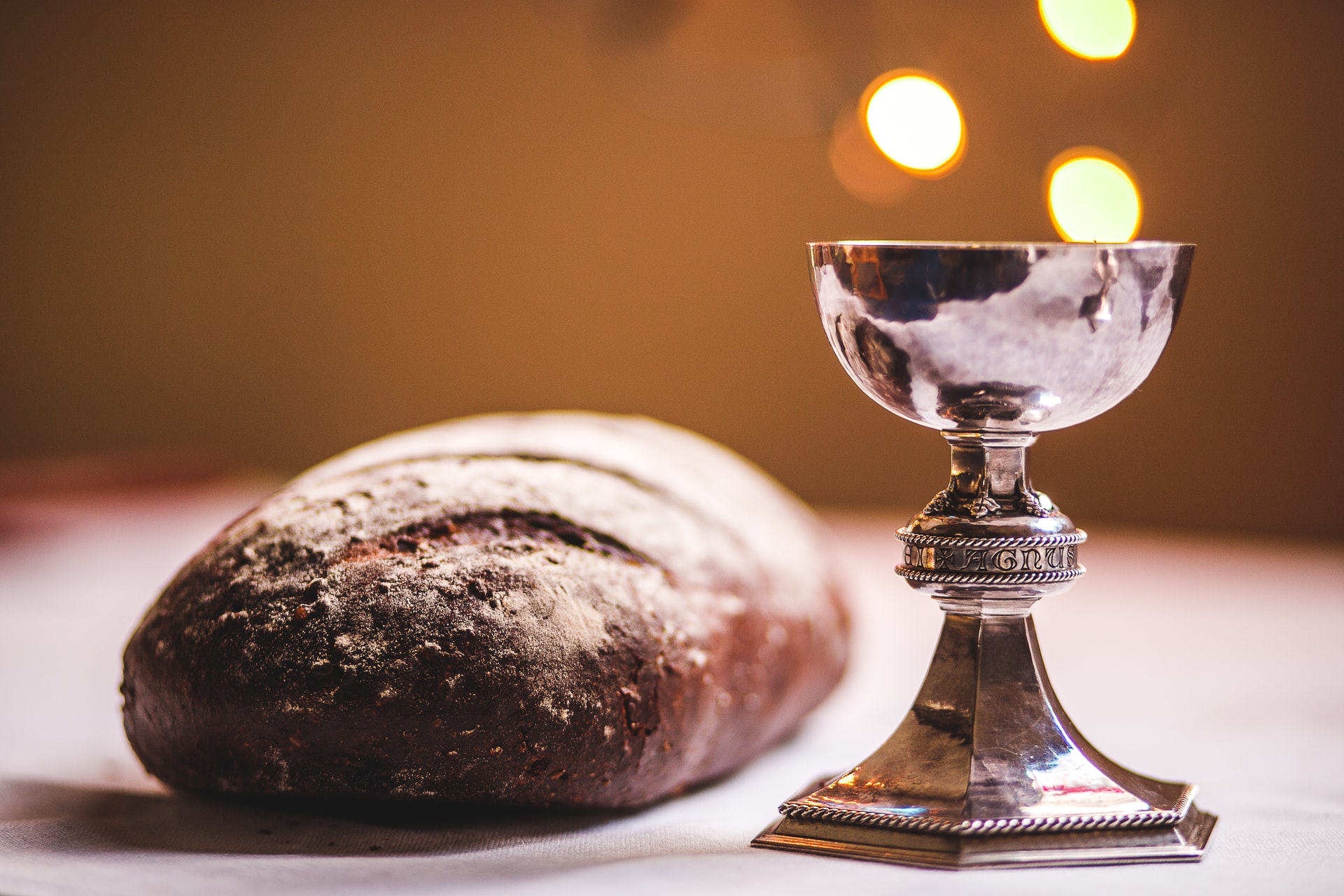 I want to get into a little theology in this blog if i may. I have been doing a bit of reading and research into the Eucharist, or communion, and how other traditions view it. So i would like to give an overview of each major schools of thought in relation to communion and then to give what I think. This is my opinion on this subject not dogma. This is what is known as a secondary area of theology rather that a primary one. whats the difference? A primary area of theology is those things one needs to believe to be truly saved, our orthodoxy, that is God is one but is three (the trinity), Christ was sinless and born of a virgin etc. Those things that all churches who believe in Christ as Lord agree on. Secondary theology is those things where we can have differences but our understanding of do not negated our salvation, they are non salvation issues, and how we understand and practice the Eucharist is one of those non salvation issues.

Firstly lets get an understanding of what a sacrament is, this will help us to understand why the Eucharist is important. A sacrament is a Christian rite recognized as of particular importance and significance. Sacraments signify God’s grace in a way that is outwardly observable to the participant. From this we see that communion is a part of what we do as church, it has importance in our spiritual life, and it signifies the grace of God to us in a visible way. So what does this mean? The sacraments are rituals that teach, strengthen and express faith. They are relevant to all areas and stages of life. So lets more on to the different ways the Eucharist is viewed.

The Catholic view The Eucharist is a Sacrament, and like all Sacraments, it conveys grace to all who receive it worthily. The Eucharist also makes present Christ’s sacrifice on the Cross in an unbloody manner, for that reason it is sometimes known as the Holy sacrifice of the Mass. Through it, forgiveness of sin may be obtained. On consecration, the bread and the wine change completely into the actual body and blood of Christ. This change is known as Transubstantiation and Christ’s presence in the elements is called the Real Presence. From the Council of Trent (1545-1563): “…By the consecration of the bread and wine there takes place a change of the whole substance of the bread into the substance of the body of Christ our Lord and of the whole substance of the wine into the substance of his blood. This change the holy Catholic Church has fittingly and properly called transubstantiation.” This can only happen when an ordained priest is present to consecrate the bread (wafer) and wine.

The Orthodox church view The Orthodox church accepts the Eucharist as a Sacrament (though it uses the term ‘Mystery’ instead of ‘Sacrament’) and also accepts the doctrines of the Real Presence and the sacrificial nature of the Eucharist. However, it does not make any attempt to explain how the change occurs, preferring to regard it as a divine mystery. The Eucharistic service is commonly known as the Divine Liturgy. Also only an ordained priest can preform this rite.

The Lutheran view In Lutheranism, there is a Sacramental Union of the bread and wine with the body and blood of Christ. In other words, Christ’s body and blood are present “in, with and under ” the forms of bread and wine. This is sometimes known as Consubstantiation (although Luther himself did not use this term). Luther explained his view by using an analogy of an iron rod placed into a fire: both are united in the red-hot iron, yet both are also distinct. Lutheranism rejects the view of the Eucharist as “making present” Christ’s sacrifice on the Cross. As in the other two a ordained Lutheran minister has to administer the rite although they can have layman assist them.

The Reformed and Presbyterian view The Reformed and Presbyterian view derives from the teachings of John Calvin: Christ is not present literally in the elements, but he is spiritually present. Those who receive the elements with faith can receive the actual body and blood of Christ through the power of the Holy Spirit which works through the sacrament, a view sometimes known as Receptionism. Calvin explained his view of the Eucharist in his Institutes: “The rule which the pious ought always to observe is, whenever they see the symbols instituted by the Lord, to think and feel surely persuaded that the truth of the thing signified is also present. For why does the Lord put the symbol of his body into your hands, but just to assure you that you truly partake of him? If this is true let us feel as much assured that the visible sign is given us in seal of an invisible gift as that his body itself is given to us.” Unlike the other views there is some disagreement as to who can administer communion. In some churches it is only the ordained pastor who can do this, in others it is either the pastor or an elder or deacon who can administer communion.

The  Zwinglin view Many other groups (e.g. non reformed Baptists) refer to the Eucharist as the Lord’s Supper or Holy Communion and deny any form of physical or spiritual presence of Christ in the bread and wine. Rather, the Lord’s supper is a remembrance of Christ’s suffering and a reminder of his power to overcome sin and death. This view derives from the teachings of the Swiss reformer Ulrich Zwingli and is commonly known as Memorialism. This view differs from the others in that anyone who is a mature Christian can administer communion.

My thoughts on this, and this is only my opinion from my personal study and understanding. I totally reject the Catholic view of the Eucharist, It cannot be defended in its totally by scripture and thus if it cannot be defended and defined by scripture it must be rejected. The Orthodox view I also reject as it is similar in its view of the real presence, the bread and wine becoming the flesh and blood of Christ, the only real difference between the Catholic and Orthodox view is the ‘how’ the elements change. while I can see where Luther’s logical is from, and the appeal to the words ‘this is my body, this is my blood’ it is in my view a stretch to say that this is actual rather than metaphorical language. But both I and Luther were not there to ascertain exactly what Christ was meaning. That said however I do disagree with the fact that there is any real presence within the elements used.

So then I am left with two views. I used to be an advocate for the Zwinglin view. My understanding was that it was totally just a memorial of what Christ has done for us. My view now however has shifted to be more in line with the reformed view, a friend of mine in New Zealand commented to me not that long ago “are you now reformed?”, My answer is no, I don’t ascribe to all points of reformed theology. My argument for the reformed view on this is as follows, the sun remains in space yet its warmth and light are present on earth. So the radiance of the Spirit conveys to us the communion of Christ’s flesh and blood (institutes of the Christian religion, book 4, chapter 17, section 12 pg 1373.)

I find the idea of the Eucharist to be just a memorial meal to leave this sacrament devoid of any real substance, sure it brings to mind what Christ has done for us, but it leaves out the fact that Christ is in us and is bring about sanctification in us by his Holy Spirit. Christ is present (albeit spirituality) in the Eucharist meal to encourage and exhort us to live a life that lives up to the ideal of Sola Dei Gloria (glory to God alone). I also personally believe that the Eucharist meal can only be administered by those who have meet the qualifications outline in scripture for a deacon. I think it would be foolish to let someone who is new to the faith to administer communion, also longevity in the church is not a mark of being mature, fruit is the evidence of maturity, if the church deems someone who has shown maturity and meets the qualifications of a deacon, then they have been given the authority by the church to administer the sacrament. remember it is a sacrament, something special that has value and meaning.

Does this mean that I would decline to take communion if it was administered by someone who was not a pastor, elder, or deacon? No, I would still partake. As i stated above this is only my opinion, no ta dogmatic assertion. my view has changed in my years and I would not be surprised if it changed more, does this mean I am 100% correct? no, but it does show, I hope, that I think about my faith, the reason why I do things, can I see them in scripture or am i basing my beliefs on tradition. I am still in the school of being perfected and will be until I am united with Christ.

Please leave a comment in the comment section, i love to read what you have to say. Also if there is a question or a topic you would like me to cover, just ask. This blog is so we can learn together, grow together and be encouraged together.

in Christ our redeemer Ps Jeff